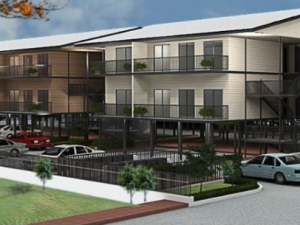 Red Dog will develop and build the project between Brimblecombe and Dyer Sts, Forest Hill, alongside The Ark Property Group, with owner and founder James Elliott saying the one and two-bedroom apartments would appeal to investors. “With its proximity to Brisbane and Toowoomba and the Warrego Highway conveniently located 6km away, our Forest Hill development will provide an attractive opportunity to investors,” Mr Elliott said.

“The development is close to The University of Queensland’s Agricultural and Vet School in Gatton, making it great value investor stock perfectly suited for accommodating students. “We are really excited about this development because it has it all for perspective investors. “We’ve designed something that residents will want to live in and that is really pleasing for us.”

A Red Dog spokesperson said the development was innovative in design, with the apartments combining the best features of pre-fabricated and modular techniques to create a light-weight, high-standard construction built on-site and assembled much quicker than regular builds. When complete, the development will consist of 30 apartments, of which 10 are on offer in the stage one release. One-bedroom apartments are 40sqm and are priced at $114,000 while two-bedroom apartments are sized at 64sqm with prices starting from $164,000.

Sales agent Craig Toohill from CPT Properties, said the homes would offer a high return for low initial purchase cost. “These apartments are ideal for those wanting to make their first move into the investment property market, due to their affordable prices and high returns, or for those wanting to expand their existing portfolio,” Mr Toohill said.

“Given the close proximity to the educational facilities, the prospect of steady, ongoing tenants is adding to the appeal.” 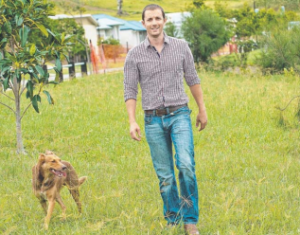 Group, which provides housing solutions for the resources industry, is set to make its skills available across the broader homes market. It has set up a new division, Red Dog Homes, to meet market demand for quality turnkey housing solutions. Red Dog, which has a 12-year business pedigree, offers a broad range of services including project management, construction and engineering.

Founder James Elliott said the new division had been launched in response to demand from new-home and second-home builders as well as the investor market. “There is very little variety in the marketplace for quality homes in the below-$600,000 price bracket,” he said.

“We wanted to answer the demand from first-home buyers and from those upgra-
ding for an affordable, turnkey solution.” Mr Elliott said to mark the launch of the new brand, Red Dog Homes was giving every new-home builder access to a dog-walker for the first three months. “I have a dog and I understand what a large part of the family they become,” he said.

“We wanted to ensure our housing solutions had something for every member of the family, even the furry ones.”

“We have designed homes with a contemporary and modern aesthetic and with functionality and day-to-day living in mind,” he said.

“Initially, our focus is on the southeast Queensland and broader Queensland market and the feedback we have had from the Gold Coast has been overwhelmingly positive. We already have a number of homes underway in the area.

“Our turnkey packages ensure there are no hidden extras for the customer and their home is ready to live in.”Mr Elliott said his Red Dog business had grown steadily over the past three years with turnover rising 16-20 per cent in the period. The company has projects valued at $1.5 million in progress.

DREAM houses can now include the perfect

Targeted at first-home buyers, upgraders and emptynesters, the pet wings are complimentary to the value of $5000 with any new home purchased before June 30. Red Dog owner and founder James Elliott, also a dog owner, said the idea originated from wanting to design homes which catered for pets. “We can cater for all pets, from snakes to white lions,” he said. “The options are limited only by buyers’ imaginations –if it can be done, we will do it.
“Built-in doggie baths, doggie daybeds, balcony bird baths, cat adventure walls, scratching post structures and custom-designed garden playgrounds are just some of the ideas homeowners can include in their homes.

“We can also create play platform structures over or under stairs, build kennels into nooks in lounge room walls, and even design a pet loo in bathrooms.”

Red Dog’s house designs cater to a variety of lifestyles and include one to four-
bedroom homes, priced from $1000 to $1500 a square metre. Mr Elliott said the pet wings could be built in any sized home and, once the client had outlined their idea, Red Dog’s draftspeople and designers brought the plan to fruition to fruition. “Our tradespeople will build the pet wings, although we may have to buy special features such as water tanks,” he said.

“Animals are an important part of family life, so we want to ensure our housing solutions have something for every member of the family,” he said. Launched in February, Red Dog Homes is a division of the Red Dog Group, which provides fixed turnkey houses. 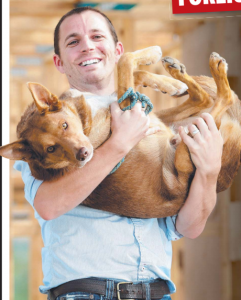 FOR Gold Coast-based builder James Elliott, using inputs made offshore went from being a cost-saving solution to an expensive headache. “Our biggest headache in getting stuff out of China was that every man and his dog says he can deliver it and send it. But … there’s either something incorrect or it’s not compliant with Australian standards, so you’ve got to send it back or resource it,” Mr Elliott says.

His company Red Dog, a commercial and residential builder, has opted to bring manufacturing back onshore as it eyes expansion into South Australia, Victoria and Western Australia. “We believe we can provide a superior product (to the modular prefab components previously sourced from China) at the same price, if not cheaper, in this country,” he says.

Mr Elliott and a business partner are investing about $75,000 to open a factory in Adelaide. They will spend about $500,000 in the next three years on the factory. He says the long-term aim is to also open a factory on Australia’s east coast. “We have the resources here, we have the people here… I don’t see why everything shouldn’t be manufactured here,” Mr Elliott says. 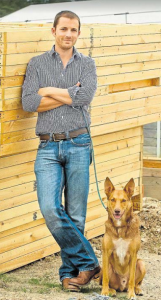 QUEENSLAND property developer Red Dog has completed development approval for a new residential sub-division located in Toowoomba. The proposed development, located at 57a Mort St, will be located on a 1131sq m site and, once complete, will be split into four sizeable, four-bedroom townhouses.

Red Dog was appointed by Positive Real Estate as the project manager for the development with construction set to begin on-site within the coming months. Owner and founder of Red Dog James Elliott said the expansive land parcel was perfectly located near local amenities and the Toowoomba CBD.

“Working with Positive Real Estate, we identified Toowoomba as a booming marketplace and an ideal location for a project such as this,” said Mr Elliott. “We jumped at the opportunity to secure this prime block of land – it’s conveniently located nearby the town centre with easy access to main arterial links.’’

Priced from $350,000, the townhouses will feature weatherboard, brick and timber finishes externally and come complete with timber garage doors and enclosed patio area. The four-bedroom, two-bathroom residences include a spacious, modern kitchen, family and dining area, powder room, timber stairs, air-conditioning and a walk-in robe and en-suite for the main bedroom. 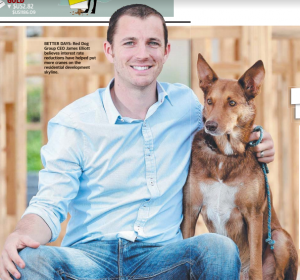 erest rates are starting to grow teeth. Mr Elliott, chief executive of construction and property company Red Dog Group, said cheaper home loans were definitely helping to boost building across southeast Queensland. “You only have to look at Brisbane’s skyline to see that construction is doing well,” said Mr Elliott, referring to the increasing number of residential development building sites.

Mr Elliott said the company, which is involved in home unit and housing developments as well as prefabricated or modular building for the mining industry, was performing well. Earlier this year the 12-year old company launched a number of new investment opportunities for joint venture partnerships. It has more than $4 million worth of projects in production from residential apartments to townhouses, single homes and commercial projects.

Mr Elliott conceded demand for the company’s prefabricated buildings had been hit by the mining downturn but even that could improve in the future. “There have been some improvements in iron ore prices which could help that sector so we will have to wait and see,” Mr Elliott said.

He agreed that interest rates were unlikely to be cut for the time being as a period of time was needed for earlier reductions to flow through to the rest of the economy.